© 2014–2023 TheSoul Publishing.
All rights reserved. All materials on this site are copyrighted and may not be used unless authorized by the Now I've Seen Everything.
----

16 Animals That Will Leave You Speechless With Their Sleeping Patterns

7 Ways to Remove the Bitterness From Onions 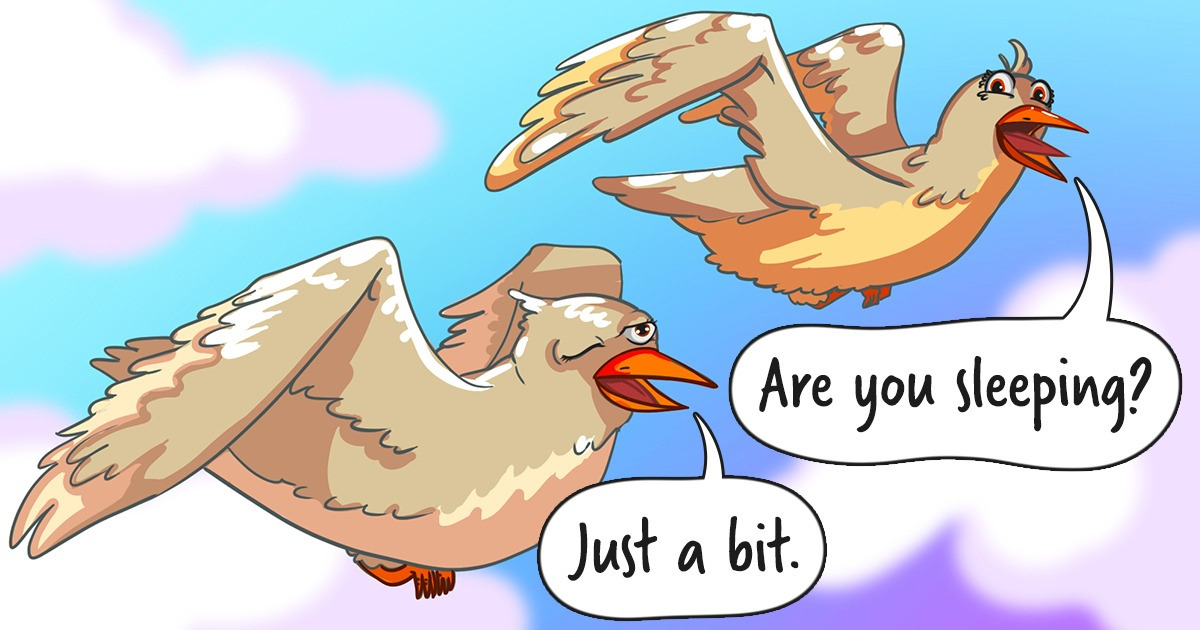 15+ Animals That Sleep With Their Eyes Open, and We’d Like to Have This Convenient Feature Too

In order to fall asleep, we close our eyes since our brain loses touch with our surroundings. It’s hard to imagine how one would sleep with their eyes open or maybe open an eye while sleeping. But for some creatures, it’s perfectly normal to sleep with their eyes open since they have developed a special ability. They are able to keep one part of their brains awake and open to outside action and keep the other part asleep.

Also, many creatures, including plants, have learned how to be able to stay asleep while their eyes are open, no matter how bright it is outside. And while humans aren’t able to sleep with their eyes in the open position, there are studies that show how one hemisphere of their brain can stay alert while the other is asleep. So, maybe we are not that different from animals, but we just haven’t learned how to fall asleep with our eyes open.

Who sleeps with their eyes open

Among the animals that sleep with their eyes open, there are some that don’t have eyelids and others that have unihemispheric sleep. Around 20% of people sleep with open eyes. In medicine, it’s called nocturnal lagophthalmos. People sleeping this way may suffer from dry eye, eye irritation, and vision problems.

For humans, sleeping with their eyes open is not normal, but for animals, it’s usually a necessary measure.

Fish sleep with both eyes open

Fish sleep with their open eyes because they don’t have eyelids. They just don’t need them in the water because their eyes can’t dry out there. The sleep fish get is different from ours. They move to get the water through the gills and get oxygen. During sleep, many of them keep moving, just not as actively.

Fish can sleep at any time of the day, but there are those that stay awake during the day and sleep during the night. Such fish usually live near coral riffs. At night, they can hide from predators there and get a good rest.

Parrotfish sleep in a peculiar way. When they want to rest, they create a jelly-like substance, forming a “sleeping bag.” This serves as protection from predators.

Sharks are fish and they don’t have eyelids. Many of them have to move a lot to get oxygen. This is why their sleep is very interesting to scientists, but we don’t know much about the process yet. Sharks don’t literally sleep, they just rest. In order to breathe while not moving, they get the water in through their mouths and through the gills.

There are theories that fish can have dreams. Studies of octopuses showed that they might change color in their sleep. Usually, their colors change when they hide from predators or sneak up on their prey. So maybe they see something similar in their dreams.

They sleep a lot, around 16 hours a day. And in winter, they can sleep up to 20 hours. According to recent studies, they don’t only sleep but also dream. They become especially sleepy after eating.

They sleep both on dry land and in the water. Some snakes live in the water but get to land to rest under a rock or a tree. These reptiles don’t have gills so they can’t be underwater all the time, they need to get to the surface from time to time. Some snakes can be underwater for anywhere from 30 minutes to 8 hours.

There’s no reliable information about the sleep of snakes underwater. They can’t sleep there for too long because they have to come out for air.

Interesting fact: Sea snakes can die of thirst even though they live in the water. They need fresh water, which is hard to find in the ocean. This is why they often go to the land.

Animals that have eyelids can also sleep with open eyes or one eye open. Some animals leave just 1 of their eyes open. This sleep is called unihemispheric. During sleep, one of the brain’s hemispheres is asleep and the other one is awake. It allows the body to do important tasks and watch the surrounding environment.

Animals that have unihemispheric sleep:

Unihemispheric sleep can often be found among sea mammals. For example, whales and belugas sleep like that. Sleeping with one eye open allows them to come to the surface when needed to get fresh air and watch the situation around them. While one of the hemispheres is asleep, the other one is watching the surroundings for predators and obstacles.

It’s believed that in order to breathe, they need to be conscious, whereas, for humans and many other animals, breathing is an unconscious process. So if they fall asleep with their entire brains and keep both eyes closed, they might sink. Additionally, they can sleep both horizontally and vertically.

However, killer whale calves don’t sleep for the first few weeks of their lives, since they need to be constantly on the move. All that activity helps regulate their body temperature (their blubbery insulation isn’t fully developed yet), keeps them afloat, and keeps them safe from predators.

Some seals, sea lions, and manatees also sleep with their eyes open. They have to be alert when they are asleep. The thing is, these mammals are good prey.

Sea lions are seen sleeping on land in various positions, usually on the tummy with all four flippers tucked under them. They also sleep on their sides and have been seen sleeping or resting on their foreflippers with their nose in the air, comfortably balanced.

Leopard seals and orcas usually hunt seals. Sea lions fall prey to orcas and sharks. Manatees are endangered by predators and humans. They are often killed by people on fast boats.

Crocodiles also sleep with their eyes open, but scientists still can’t figure out the reason. Crocodiles have nobody to watch out for, but they prefer to control the situation in their sleep. Studies show that crocodiles don’t always have unihemispheric sleep. They use it when there’s potential danger — like if humans or other crocodiles are around.

Iguanas and some lizards also have unihemispheric sleep, according to scientists. Sleeping with their eyes open helps them stay alert. They like to sleep high up in trees where they can remain hidden and safe. They also sleep in dark areas such as under rocks, in tunnels, caves, and hidden nests.

Humboldt penguins from South America also sleep with their eyes open. They have to sleep like that to watch over their offspring. These penguins try not to damage the eggs they are incubating. And after the chicks hatch, the parents have to watch over them 24/7 since penguin eggs and their chicks are what the local predators eat.

By the way, penguins usually sleep standing up.

Scientists think that these mammals leave their eyes open to protect themselves from predators, otherwise, they can be attacked by monkeys and crowned eagles.

The fact that some birds use unihemispheric sleep has been known since the end of the previous century. It helps them protect themselves from predators. Birds also sleep like this while traveling. Those that are in the middle of the group can rest with both eyes closed, and the others keep one open.

Scientists believe that in potentially dangerous situations, birds sleep with one of their hemispheres and use the open eye to watch out for possible threats. Geese and mallards sleep like this too. More than 50% of the population of these birds become prey during the first years of their lives.

Even predator birds have to be cautious when sleeping. For example, peregrines sleep only with one hemisphere to protect themselves from bigger predators — golden eagles and great horned owls. Common blackbirds often fall prey to animals and bigger birds. But unihemispheric sleep helps blackbirds avoid it.

Other animals that sleep with open eyes

Bonus: How many hours do animals sleep?

Bonus 2: How do insects sleep?

Have you ever seen an animal that would sleep with its eyes open? After reading this article, do you think that these animals have valid reasons to sleep with one eye open?

-1--
Now I've Seen Everything/Animals/15+ Animals That Sleep With Their Eyes Open, and We’d Like to Have This Convenient Feature Too
Share This Article
You may like these articles